What the numbers would suggest is a very minor drop in May and a much more drastic drop in June. Not what is happening. I think putting the two months together is probably a more accurate indication of what is going on. The fact is the market showed one of the most significant increases on record in January 2022, an increase again, though more modest in February, and has been adjusting downward pretty uniformly since.

So why are the reported numbers so suspect? Although nobody seems to know, I think the Board is probably tracking closed transactions rather than pending, and hence the numbers tend to be historic in nature, lagging behind reality by 1-2 months (The time between when a deal is struck until it closes.)

Although I can’t document the origination of the data, I think the graph provided by the Board, while not at all in line with the reported numbers, is pretty well in sync with what is going on. 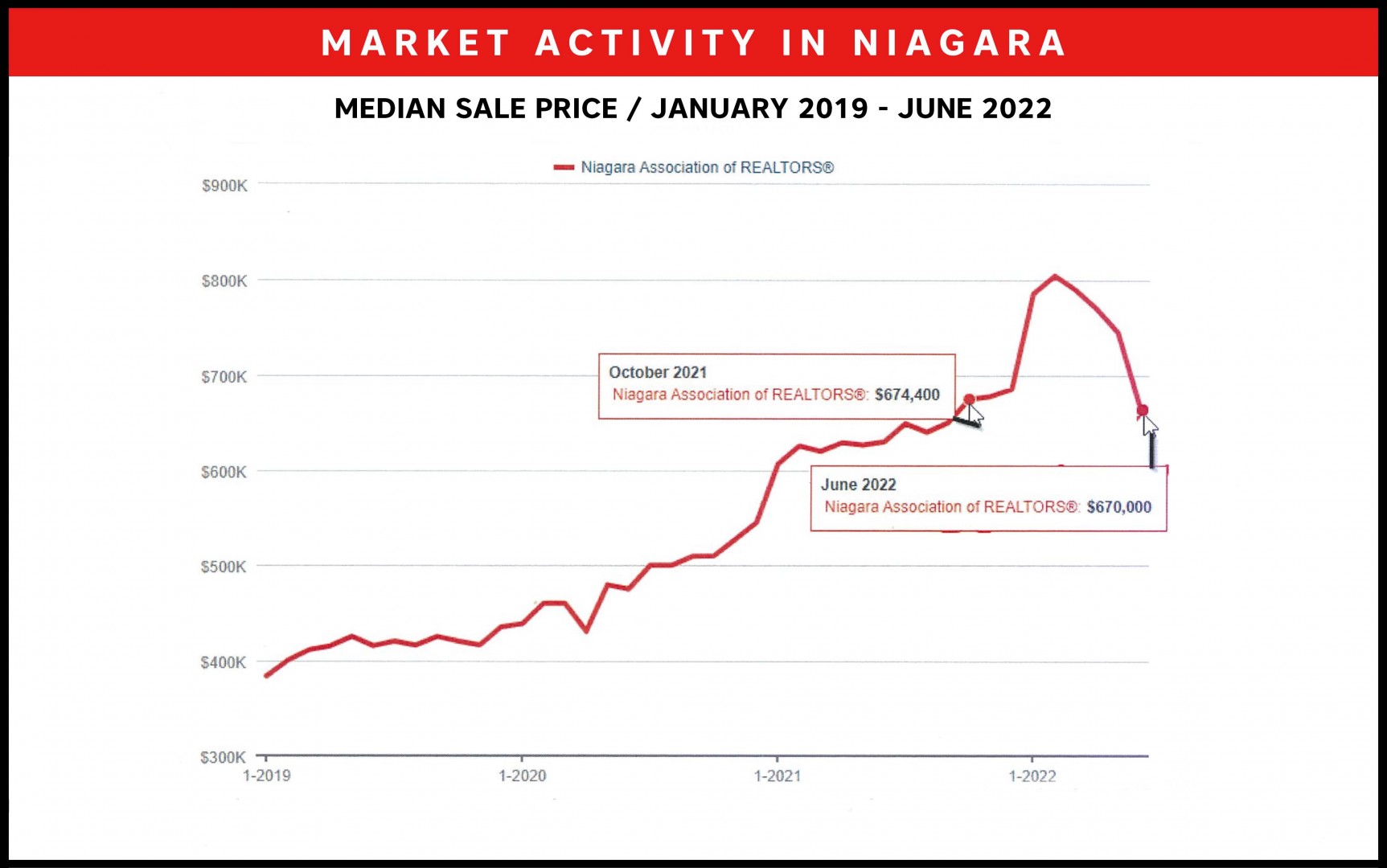 One thing is certain. The gains of 2022 have pretty much been erased. In fact, according to the graph, we are now at about the price point we were at back in October 2021.

Take another look at the price chart, specifically the change from May to June. There really is no consistency from one Municipality to another. Niagara on the Lake for example came in showing a price drop of $396,755, Grimsby a drop of $332,327, while Fort Erie registered an increase of $43,492. And I think in some ways that tells the story of what is going on right now. Speculators by and large are out of the market. As a result, unit sales have dropped significantly.

But the buyers who are first-time, move-up, lifestyle change, etc., are still very much in play. People, both buyers, and sellers, are somewhat bewildered. Prices dropping, and interest rates rising. What should they do? And when the market is volatile, prices are skewed. Some are significantly down. Some actually up.

If we learn a lesson from 1990, I think shortly the market will stabilize. Prices will level out. At that point, both buyers and sellers will have a clearer idea of how to respond. It’s difficult to predict with any certainty as to how long the turmoil will last or when we will see prices on the rise again. Too many issues at play. Inflations, the war in Ukraine, interest rate hikes, and labour scarcity being the main disruptive forces. But I think you’ll see stability in prices before year-end, as well as a leveling off of interest rates. And in the meantime, the average consumer, anyone with a house to sell and a house to buy, should come out about even, and even entry-level buyers will find interest rate hikes are offset by settling prices, and qualifying for a mortgage has already been factored in because the stress test has been a preparation for these interest rate increases.