There is a lot going on right now. The COVID-19 Pandemic, which has been front and centre in the news and in all our lives for over a year and a half now, just won’t go away. New infection numbers are on the rise, alarmingly so when you consider the number of people who have been vaccinated. And this spike in infections holds true across the country and around the globe, giving rise to talk about a fourth wave and a possible renewed lockdown.

School is back, and for a lot of kids, this will be their first introduction into the classroom in many, many months. End of summer, always a distracting time for parents as holidays come to an end and school starts, will be even more challenging this year as parents contend with COVID-19.

And then, into the mix we add a Fall Federal election, now less than a week away. And while the lead-up time has been relatively short, the election has impacted both August and September when it comes to real estate.

With all these factors at play, it's remarkable to see the real estate market continuing to perform so steadily, and in some ways predictably.

It feels, for a lot of people, like the market is shifting from being a runaway seller’s market into a more balanced territory. While multiple offers and escalating prices still occur, they are certainly less frequent than they were say three or four months ago. And as we watch the sales reports come in on a daily basis, we see an increasing number of conditional offers being accepted by sellers. That’s good news for buyers and for the marketplace in general.

But going beyond the ‘feeling’ that the market is adjusting and moderating, let’s take a look at the actual statistical data.

First looking at unit sales, let's see if the market is slowing down and if so, by how much. In August our Niagara trading area registered 779 unit sales for the month. That’s down 20 units or 2.50% from the 799 recorded in July.

But a drop of 20 units going into the Fall is not surprising. As you’ll see in the graph below, it’s normal to see the sales figures taper downward from the spring. This has consistently been the case every year with the exception of 2020 when the market peaked in July. But this as we’ve seen was the result of pent-up demand following the near market shut down of April and May 2020 due to the introduction of COVID-19. The fact of the matter is that at 779 units August 2021 still remains above August 2017, 2018, and 2019 and in relatively record territory for August. 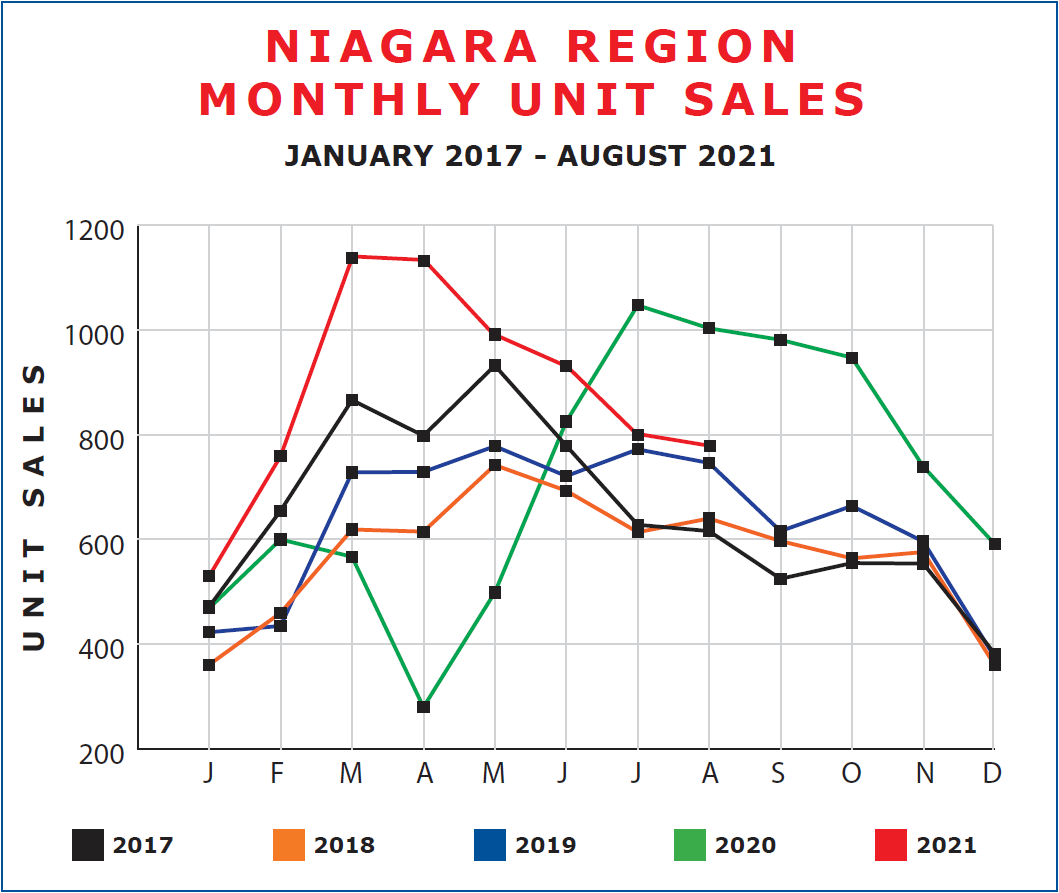 Now, what about price? What impact have all the factors at play in August had here? With a seasonal decline in number of sales added into the mix, are we seeing a drop in values across the board? Not really. In August, the average sale price across Niagara came in at $697,572. That’s down $11,356 or 1.60% from July. On its own, that might appear significant. After all, 1.6% in a single month extrapolated out over 12 months might become 20% in a year.

But I’m not really seeing that. And neither should you. Two things to realize. Historically price gains are made in the first 6 months of the year. Generally, the last 6 months sees a stabilization of prices. And secondly, there is natural volatility from month to month. That’s normal. It does not indicate a trend. Let me explain.

August’s average price of $697,572 while lower than July, was even with June’s $697,875 figure, which in itself was up from May and down from April. Results in the 1% - 2% range are generally reflective of buying practices (fewer or more expensive homes sold in a month) rather than any sort of trend.

So, what are we seeing? A pretty typical, very strong, and healthy market. And I expect we’ll see more of the same as we move on through the Fall and into year-end.

Prices should remain strong but steady while sales numbers will decline marginally due to season. From now to year-end it remains a great time, both for buyers and for sellers, to be active in the market. And depending on the elections and barring any undue Government intervention, 2022 appears from here to be another outstanding year in real estate.